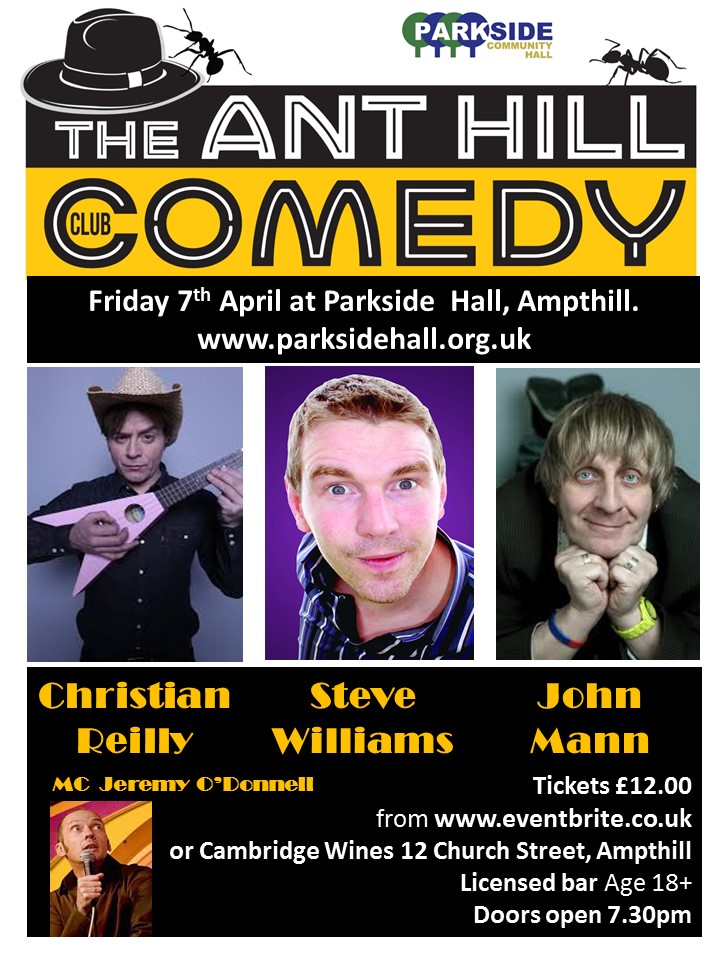 Jeremy O’Donnell returns to be our lovable Master of Ceremonies with his friendly pokes at Ampthill, Flitwick and surrounding villages.

The standard of our acts just gets better and better:

Headlining is Steve Williams who is at the top of his game, regularly performing at every major UK comedy club including Jongleurs, Comedy Store, Glee Club, The Stand, The Hyennah, The Komedia, and Lee Hursts Backyard Club.

“The Prodigy” – The Independent , “Seriously recommended viewing, immerse yourself in his world”
– Manchester City Life Magazine, A small time in his company will leave you wanting more, the sign of a good comedian’ Comedy Central, ‘rib-ticklingly, side splittingly hilarious. He’s one of the UK’s finest comedians’ Metro

“His stand-up is witty and heaving with punchlines…will win over all but the hardest hearts and minds.” Chortle, “This genuine, trendy, confident comedian has a natural talent for risky jokes, song and quips which you can’t help laughing at! If you get the chance to see Reilly live, do so. He is not to be missed!” Funny.co.uk

Our middle act is John Mann. Sharp observation and wry wit mingled effortlessly with a gentle and confident rapport ensure this comic is unfailingly funny. Whether he is discussing the senile antics of senior citizens or giving handy hints to aid successful shoplifting, John’s gentle and honest delivery makes him one of the most enjoyable comedians on the circuit today.

“Distinctly amusing, engaging and talented” Malcolm Hay – Time Out, “One of the funniest people I know” Phill Jupitus

This is going to be a fantastic show so tell everyone you know to get their tickets fast – you know we usually sell out fast!
The reputation of The Anthill Club is growing and so we are attracting better and better acts all the time. As a result we have had to increase the ticket price by a couple of quid – but we are sure you will agree it is worth it to get these great acts.

Doors will open at 7.30pm and acts will start at about 8.15pm – trains allowing! Gives you time to get one of our now famous gourmet hotdogs and drinks in from the bar.

The ANT HILL Comedy Club
This site uses cookies. By continuing to browse the site, you are agreeing to our use of cookies: Find out more.